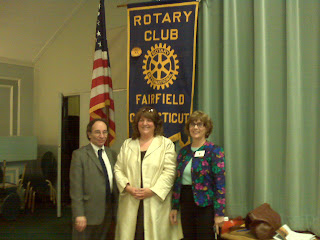 In this photo: George Markley, me, Norma Peterson

I had the honor of speaking last week at the Fairfield, CT Rotary Club (www.FairfieldRotary.org). Given Rotary's commitment to community, ethics and "service above self," discussing the hows and whys of child sexual abuse, and the difference a community can make, with these folks felt especially meaningful and productive.

Indeed, because of that event, every single children's advocacy center in Connecticut will soon have a copy of "Kisses From Dolce!"

Thank you to Paul Greatsinger, Norma Peterson and George Markley for giving me such a wonderful, receptive forum; thank you to those who attended and paid such rapt attention to what can be a tough subject; thank you to the folks who stayed to chat and purchase books for themselves and the CAC's. It was a lovely, meaningful day.

After an event, I will often take a walk or a ride to clear out my head, take in all that's happened and, weather permitting, soak up the wonderful weather. After the Rotary luncheon, I headed to Fairfield beach, where the sounds of the gulls and the waves melded with the glistening tide to create just a little slice of heaven and offer some peace. One of my favorite things to do in one of my favorite places to do it... 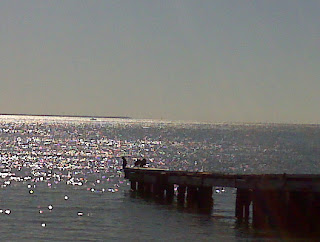 Posted by Susan Komisar Hausman at 7:21 PM No comments: 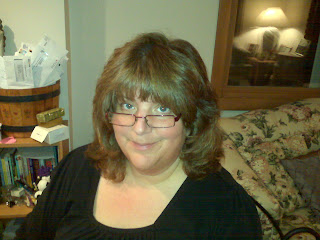 Me, October 12, 2009, the night of the MomTV interview. Though technology got in the way of the full interview we had planned, MomTV has posted video that can be watched on their playback page:

Once you are on the page, do the following:

The video will begin.

Kudos to Danielle Smith for getting out the info I was so hoping to share myself:

the drive to get "Kisses From Dolce" in every children's advocacy center in this country.

To purchase a book for a CAC, please contact me at KissesFromDolce@gmail.com

Posted by Susan Komisar Hausman at 7:12 PM No comments:

"Kisses From Dolce" may be purchased directly from me at KissesFromDolce@gmail.com, at Amazon.com or from the publisher at Trafford.com. A portion of each new book sale is donated directly to a child sexual abuse prevention workshop fund. Please consider purchasing one or more books to donate to a children's advocacy center, school, library or other youth-serving organization. There are 700 children's advocacy centers in the U.S.; I can help match you up with one that would like the book.
For more information about the book, book events, Darkness To Light workshops or speaking engagements, please contact me, Susan Komisar Hausman at KissesFromDolce@gmail.com.

Together we can make a difference!
Posted by Susan Komisar Hausman at 6:20 PM No comments:

I will be on MomTV talking about "Kisses From Dolce" and child sexual abuse...this Monday, October 12, 9 PM EST at www.momtv.com/yourcauses.html You can participate, ask questions or just sit back and watch! I'm launching my drive to place "Kisses From Dolce" in all 700 US children's advocacy centers and fund the No Secrets No Shame Foundation. For more information, you may reach me at KissesFromDolce@gmail.com.

Posted by Susan Komisar Hausman at 11:12 AM No comments:

"Teaching Children To Trust, To Tell," written by Susan Campbell, was published on April 28, 2009 by The Hartford Courant. The article was recently archived by the paper, accessible only for a fee, however, the Courant has graciously agreed to let me post it here, fully credited, in its entirety. Thank you to Susan for a beautiful article and to the Courant for allowing me to post.

TEACHING CHILDREN TO TRUST, TO TELL

Susan Komisar Hausman settles herself onto a dinky preschooler's chair too small for a 7-year-old, much less an adult woman.
But Hausman is on a mission.
She has in hand her new book, "Kisses From Dolce: A Book for Children About Trusting and Telling," a story about a little girl named Sophia and Dolce (Italian for "sweet"), a dog she befriends.
In the story, Sophia one day withdraws from the class - even beloved Dolce - and works up her nerve to tell her teacher that someone is touching her inappropriately. The story ends happily. Her teacher "made some phone calls to people she knew who could make things better. Thank goodness! Phew!"
It is a story with which Hausman is all too familiar. At age 7, a trusted family friend in his 40s molested her. She told no one until she was in her late 40s, and her parents believed and supported her.
So her story ended happily, too, "but who wants to wait until you're 48 years old?" says Hausman, who has also written poetry. "That's always been the driving force behind this book. If one little one who hears this story would turn to someone they trust and say, 'I need help,' it will have been worth it. It comes from that place."
Today, Hausman has come from her Massachusetts home to read "Dolce" with other volunteers to all 71 Community Renewal Team preschool classes scattered around six towns, including Hartford. That's nearly 1,300 students, and she's joined by Department of Children and Families Commissioner Susan I. Hamilton, and state Sen. John Fonfara, D-1st District, in conjunction with Child Abuse Prevention Month.
Everyone put their own spin when they read the book aloud, but their shared message was: If someone's touching you, and you feel bad, tell someone you trust, and keep telling until it stops.
Hausman settles in under the watchful eye of Stacy Luna, a CRT teacher and a fierce and smiling woman who looks as though she can part water just by raising her eyebrows. Luna talks to the children about safe touch all the time, she says. These are her children, and they are what keep her coming in.
The 10 children in Miss Stacy's class today - ages 3 to 5 - sit cross-legged on the floor, crackling with energy and quick to shoot their hands skyward when Hausman asks a question.
"Who should Sophia tell?" asks Hausman as she starts reading the story.
The answers come quickly: Her mom. Her dad. Her aunt. Her grandpa. Her teacher, to which Luna interjects: "Because Miss Stacy is here to keep you - what?"
"Safe!" the children answer.
"Do we keep secrets about touching?" asks Hausman.
"Nooo!" the children cry.
"That's right," says Hausman. "We tell, and we keep telling until it stops."
When Hausman finishes the book, a tiny boy sitting in the corner pops up and asks, "Can I give you a hug?"
Hausman says yes and is soon smothered in a clutch of preschoolers throwing their arms around her, and each other.
Afterward, Hausman says quietly, "They had a workshop or something. Did you hear them ask? 'Can I give you a hug?' "

To see the photo "Just After The Group Hug Broke Up" on Susan Campbell's blog, "Fear Itself", click here.

Posted by Susan Komisar Hausman at 6:23 PM No comments:

"The best and most beautiful things in the world cannot be seen or even touched. They must be felt within the heart" ~ Helen Keller

Posted by Susan Komisar Hausman at 7:12 PM No comments:

My heart goes out to the very brave and courageous Elizabeth Smart, and her family. She testified today at the trial of her abductor.You can read about her testimony, and her horrific ordeal, here...
http://www.foxnews.com/story/0,2933,558548,00.html
Posted by Susan Komisar Hausman at 8:21 PM No comments:

Email ThisBlogThis!Share to TwitterShare to FacebookShare to Pinterest
Whatever your personal beliefs about Mackenzie Phillips' incest disclosure, it is hard to look away from the outpouring of public reactions. So many of the online comments I've read are vicious broadcasts of disgust at her and her decision to disclose. Comment after comment, blaming the hideousness of the story on her, berating her for her drug abuse, for now removing the joy of listening to John's music, among other things. There are also numerous supportive, compassionate words, but one thing is very clear: the topic of incest provokes tremendous disgust, aimed, unfortunately, and all too commonly, at the victim.
And make no mistake about it, she was a victim.
It is a parent's job, an adult's job, to create environments for children that are safe, to establish and uphold boundaries. Even with the incest piece removed, it seems there were few, if any, boundaries, in Mackenzie's life with her father. They did drugs together; by his own admission, he shot her up for the very first time. Though she was 19 at the time of their first sexual encounter, the parent/child boundaries that should have been in place were non-existent. While she has love and compassion for him, her father failed her and some
of his behavior was, I believe, criminal.
Perhaps Mackenzie cannot access her anger at him. Perhaps she has and isn't sharing that with us. I don't know.
I do know that this step, speaking out, is the hardest thing any survivor can do because recrimination awaits at every turn. She will, though, find supporters among the throng and, hopefully, garner enough fortitude from that support to cope with the myriad of feelings and challenges survivors face.
For the rest of us, this is a lesson. Child sexual abuse is all around us. 90% of abuse is perpetrated by someone a child (and likely the family) knows and trusts. Approximately 50% of that is familial, incest.
Based on the remarks I've seen online, many people need much education about how CSA happens, why it continues and what they can do to prevent, recognize and respond to it. People still do not want to think that those among us, folks they know, would do such a thing. People want to maintain the status quo at all costs, which is why the victims, rather than the perpetrators, so often take the very harsh blame.
But the most important piece in protecting children is for each of us adults to look within, taking a good, long look in the mirror, facing ourselves and our own self-imposed obstacles. What are our personal challenges in combating abuse? Why are we afraid to report something when we have a "reasonable suspicion," the standard for mandated reporting? Holding onto false beliefs, often grounded in ignorance, steeping ourselves in denial, makes action impossible and perpetuates this terrible problem. The choices we make, to face this societal problem, and each case, head on, or to look away, are ours.We owe it to our kids to do the right thing.
Posted by Susan Komisar Hausman at 7:31 PM No comments: