My blood has been boiling lately regarding the disgraceful public words directed at Olympic champion Gabby Douglas' appearance. Floored by what we were hearing about her hair and her teeth, my family and I were perplexed. Huh??? What we saw each and every time we watched her compete and interview was an adorable, talented, hard-working, talented, bright, talented teenager. An incredible inspiration to every other child. Who were these people seeing something else? What was happening in their heads that even allowed space for such garbage? And garbage it was/is, garbage that also goes by another name: bullying.
Whenever I land on an internet page that invites public comments, I recoil at the trash (usually anonymous or via pseudonym) directed at others. Nasty words about being ugly or "too" fat or "too" thin, to name a few, safely hurled from behind the coward's anonymous facade. I've said for years that those remarks are bullying, plain and simple, a stark reminder of just what kind of example we as a society set for our children when, ironically, simultaneously, we are rallying against child-to-child bullying, ramping up workshops and trainings to fight it. Are these people jealous? Do they hate their own lives, their own hair and teeth? Their own inability to shine in some aspect of their lives?
How on earth can we say to our children, "You must not bully" when we adults do the very same thing? How can we effectively crack through the psyches of bullying adults so they look in the proverbial mirror and truly see themselves? How do we inspire kindness and character in human beings who've already, theoretically, grown up? I can tell you this: until we do and our children see adults behaving well toward one another, bullying between children will continue. No amount of words will make the difference - only behavior. The number one rule of teaching children is to lead by example - they watch us closely, taking it all in and then they follow the leader.
Time for us to lead better.
Until then, I say to Gabby Douglas, "You ROCK! Go out there with that beautiful head held high and grab your future the way you grabbed that All-Around medal. I know my family and I will be cheering your every step! Go, Gabby!"

Posted by Susan Komisar Hausman at 11:55 AM 3 comments: 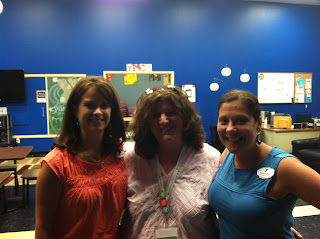 Just a few weeks ago I had the great pleasure of traveling to Syracuse, NY to lead a Darkness To Light Facilitator Workshop. Thanks to the determined efforts of the Syracuse Y's team leaders and workshop organizers, Kelly Miner and Cheryl Walker, folks attended from near and far, representing, among others, YMCAs, social service groups and child protective services. We learned together, shared with each other and by day's end I knew that 16 more empassioned, empowered leaders were heading back to their communities well prepared to educate adults to prevent, recognize and react responsibly to child sexual abuse via Stewards of Children.
Despite the long day that goes with a facilitator workshop, there is never a time when I don't leave feeling rewarded and enriched, both from having engaged with a new set of attendees and the knowledge that children in their spheres will be better served. I always hope that the workshop experience will stay with them as they pursue their prevention endeavors, knowing that, at least for 8 intense hours, they were surrounded by like-thinking people devoted to protecting kids.
Thank you, Cheryl and Kelly for a meaningful day and wonderful opportunity.

Photo: Cheryl Walker, me, Kelly Miner
Posted by Susan Komisar Hausman at 11:23 AM No comments: