Holding Something So Painful, So Close, For So Long

I had a request to meet for coffee recently from a woman who wanted to purchase several copies of "Kisses From Dolce." She is in her 80's, had seen the book at a friend's house and wanted to be sure to give a copy to each of her grown children and their families. Such a request is, of course, gratifying, and I was happy to meet with her. As is so often the case, during our meeting she proceeded to tell me about her own experience with abuse when she was a young girl, so many years ago. Not much about child sexual abuse surprises me anymore and, given the statistics, odds are the person you're with at any given time has been a victim. Perhaps because of that I have found that, since the book's release, many of my most ardent supporters are people, usually women, who were assaulted when they were young and are now in their later years. CSA victims of all ages have come forward to tell me their stories but so many older victims have literally embraced me in gratitude for feeling they now had someone they could share their story with who would understand, liberating them from holding something so painful, so close, for so long.
Another woman, in her late 70's, shared with me recently that she had never said a word to anyone about an uncle who had fondled her as a young teen - until she sat at a table with female relatives, including her sister. One of the women made a comment about the uncle and the next thing this woman knew they were all comparing notes about their experiences. The uncle had abused each of them and for all this time, so many years, no one ever said a word. Now they could speak, give voice to their experience and pain, and take strength from knowing they did nothing wrong - he was a predator. That woman, one of my biggest supporters (and I one of her biggest fans), bought numerous copies of "Kisses From Dolce" right from the beginning, donating them to libraries, schools and other community organizations. I believe she felt it was the voice she never had and she wanted to be sure that she was giving that voice to others.
Another woman, also in her late 70's, shared with me that when she was about 9 years old, she and a friend were playing and had walked into an abandoned building to explore. A man appeared from one of the rooms and exposed himself to them. The girls ran home. This woman said nothing to her family - she was too afraid. The other girl told her parents. That girl and her family came over to the friend's house to share the story with the other parents. When they did, the first little girl's father walked up to her and smacked her across the face. He hit this little girl, his daughter, because a man had exposed his genitalia to her and she had been too afraid to tell. One  assault atop the other. My heart broke when she shared this with me. Instead of understanding and compassion this little girl received anger and more abuse. Perhaps her father could not handle his own myriad emotions upon hearing such distressing news...I do not know. All I know is that a little girl, 9 years old, received no support just when she needed it most. That woman had never shared her story before telling me. I can only hope that finally, after so many years of carrying it around, she found some comfort in knowing she had a voice, a right to be heard and my support. I heard her, understood what she was saying and how painful an experience that was.
If we adults learn nothing more from our awareness of CSA and its prevalence, it's that we must TALK ABOUT IT. Child sexual abuse can no longer be a taboo topic. Adults have to face the truth about how child sexual abuse happens, its prevalence, who are predators (90% are known and trusted by the victims and their families) if we are to begin to rid society of this scourge. Children are not responsible for their safety; it is our job to carry that load. Do we need to talk with children about their bodies and boundaries and trusting and telling? Absolutely, and often, whenever we are able, just as we should broach many difficult topics with them throughout their childhoods, at age-appropriate levels. You've heard me say it many times: adults need to learn how to prevent, recognize and react responsibly to child sexual abuse. When we do, this will be a much safer world for our children.
I encourage you to visit Darkness To Light's website. If you like, you can take their prevention training online.
StopItNow! has wonderful resources online as well.
I hope you will consider purchasing a copy or two of "Kisses From Dolce," either directly from me at KissesFromDolce@gmail.com, from Amazon or from the publisher, Trafford.
Whatever you do, please take time to get educated about child sexual abuse and to implement the prevention and response strategies that could very well spare a child years of pain and shame. The wonderful ladies I spoke of here deserved better and so do today's children.
Thanks.
Posted by Susan Komisar Hausman at 11:27 AM No comments: 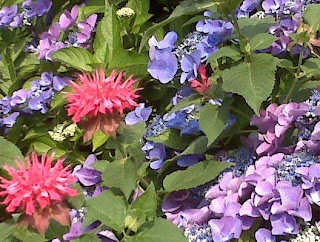 "Though nothing can bring back the hour
Of splendour in the grass, of glory in the flower;
We will grieve not, rather find
Strength in what remains behind..." *

Glorious words from the brilliant William Wordsworth. Some days, like today, I find they offer tremendous comfort, hope and inspiration. I do believe that, among other things, healing requires grief but feeling that grief moves us along and frees up space within for strength and joy.
I offer up these great words to you today in hopes that you, like so many of Wordsworth's readers, will find "strength in what remains behind" and the ability to forge ahead in peace.
*Excerpted from Wordsworth's poem "Ode: Intimations of Immortality from Recollections of Early Childhood."

Posted by Susan Komisar Hausman at 4:51 PM No comments: 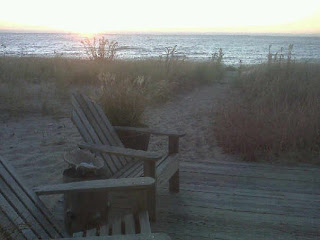 The last time I visited my hometown for an extended solo stay, I had a chance to do some healing. Part of that was the place I stayed: on the beach, with a new friend, one who's traveling her own road of self-discovery and was happy to share her place with me. This was my morning view and I find now that just looking at this photo takes me back to the peaceful, grounded feelings I had then, sitting there, contemplating and reflecting. A visit with an old friend while I was in town, one who played an important role in my journey, had been rich, and sitting facing the water, listening to the sounds of the beach, gave opportunity to take that visit in, put it all in perspective.
I know the healing road is ongoing: sometimes it's bumpy and painful, other times joy-filled. No matter which, it is deeply rewarding and moving forward with new awareness has, at least for me, opened up life's possibilities.
So, until I can get back to my perch at the beach in person, I'll stay close to my photo and just be.
Posted by Susan Komisar Hausman at 9:45 AM No comments: