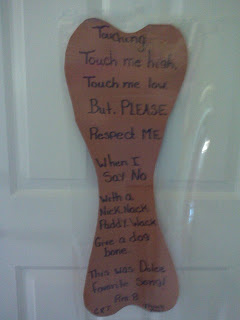 April is Child Abuse Prevention month. While those who work tirelessly on prevention and resolution know that every month, every day, is abuse prevention time, dedicating a calendar month toward abuse, I believe, is an effective way of directing public attention to a topic many folks prefer to sweep under the rug. No more. Not possible.

April began for me in NYC, attending the Voices of Valor Celebration sponsored by Dayenu! Enough Silence. Dayenu is the family violence initiative of the NY Board of Rabbis, headed up by Rabbi Diana Manber. The event, meaningful and moving, honored several NY area professionals for their work in prevention, resolution and healing: Dr. Mel Schneiderman, Iona Siegel, Shoshannah Frydman and posthumously, Rabbi Julie Spitzer. Also honored was keynote speaker, Angela Shelton. Angela, who due to a back injury was forced to spend most of the event in pain and in a wheelchair, has been a dynamic, outspoken advocate for victims and prevention. A model, actress, writer, Darkness To Light facilitator, and filmmaker, Angela won acclaim for her film “Searching For Angela Shelton.” It was an honor and inspiration to meet her and hear her speak.
April 15 took me to Hartford, CT, back to my friends at the Aetna Foundation Children’s Center at St. Francis Hospital. Stacy Karpowitz, Coordinator of Outreach and Education for the Center, planned a wonderful abuse prevention event in the Patient Care Tower Rotunda at St. Francis. Students from the Greater Hartford Academy of the Arts sang (I was floored to realize I knew the composer, Jim Papoulis; haven't seen him since freshman year at UPenn), Sister Judy Cary, VP of Mission Integration at St. Francis delivered a beautiful blessing, Stacy "emceed" and I was the speaker. I read "Kisses From Dolce" to the 80-plus attendees and then spoke, briefly, about my own experience with abuse, hope and healing. Afterwards, I had the pleasure of meeting several attendees, like-minded folks, for whom abuse prevention/resolution is paramount. Displayed in the rotunda were over 400 pinwheels, each one symbolizing an abused child who had been treated during the year at the CAC.

Minutes before I spoke, the CAC manager, Regina Dyton, shared with me about meeting, in the hospital corridor, a young woman she had helped 14 years ago. The woman rushed up to Regina, gave her a huge, firm hug and asked if she remembered who she was. Regina had successfully worked to save the then-teen from an abusive living environment. Here she was, so many years later, living a fulfilling and productive life, the goal of any professional working to help a young abuse victim. Ironically, the night before the event, Regina and Stacy had spent hours at the CAC working on a crisis case, a family just at the beginning of their road. It had been a long, draining evening for all involved and yet, here, the very next day, in all her weariness, Regina came face to face with someone on the other end, someone she herself had helped. The reminder of why they do what they do. Less than 24 hours, full circle. I know it resonated deeply with Regina, and, after I received her permission to share the story with the rotunda crowd, with everyone else there.
It was a beautiful story, beautiful event, beautiful day.

Friday morning I headed back to Hartford, first to one of the Community Renewal Team's Head Start centers for its Family Fun Day. The center, on Locust Street, is bright and vibrant and there was so much going on that morning. Bethanne Vergean, the Disability, Mental Health and Transition Manager for CRT, had invited me to read "KFD" to 13 classrooms. What a wonderful experience that was! This is what the book is all about and sitting, reading, and interacting with these smart, beautiful children was fantastic. They "got" the book; we talked about trusting, touching and telling. We talked about not keeping secrets and who they would tell if they ever had a problem. All of these children have taken Stacy's "My Body Is Special" workshop, so this reinforced what they've already talked about before.
Each class had prepared a special question for me...these were the best! Among the topics: the color of my house, how long it took me to write the book, what color Dolce really is. One child told me about her pet goldfish, another about his pet tiger!! The children often gathered close around me, playing with my jewelry. Some asked for a hug.
After reading it was off to the Lyceum for the very first “Child First” luncheon saluting the Hartford Multidisciplinary Team (MDT). Stacy and MDT Coordinator, Ann Glaser, were the masterminds behind this event and they did a wonderful job. Two awards were presented: to Susan Campbell, the award-winning Hartford Courant columnist who writes often about child abuse, and to Jake Lewtan, 13 years old, who created a “Freeze” event to raise money for abuse prevention. Several folks spoke, including the Hartford Chief of Police, Daryl K. Roberts, who so beautifully reminded everyone of our daily duty in protecting children through not only our actions but also our words. For those of you unfamiliar with the Multidisciplinary model, the team includes law enforcement, medical personnel, mental health professionals, educators, legal representatives and victim advocates. The goal of the MDT, and I am greatly simplifying here, is to provide a coordinated effort, maximizing successful prosecution of perpetrators and minimizing further trauma to the child.
This team does incredible, amazing work. It was an honor to spend an afternoon in their presence; every community needs a team like this.
And, finally, speaking of honored…Thursday, April 23rd, was, for me, an extraordinary day. 71 Head Start classrooms, almost 1300 children, read “Kisses From Dolce” simultaneously.
CRT’s Bethanne put this event together, inviting, aside from me, guest readers to read and discuss the book with the children. Among the readers were some of CT’s top child advocates: DCF Commissioner Susan Hamilton, Jeanne Milstein, Karen Foley Schain of the Children’s Trust Fund, Elaine Zimmerman of the Commission on Children. Seven of Hartford’s police detectives, who work closely with Stacy on the MDT, read, as well.
Combined with the Locust Street event the previous week, almost 1500 Hartford children have had the experience of hearing and discussing the book. Child abuse prevention is a self-described passion for Bethanne and it shows. She worked long and hard to coordinate this event and, in the end, many children walked away with knowledge and tools to help themselves a bit better.
The photos from the CRT event have not yet arrived in my mailbox, but I do have one to share with you. Classroom # 8 wrote a song to sing for me about the book and what they learned. They wrote the lyrics on a very large paper bone:
“Touch me high, touch me low, but PLEASE respect me when I say NO! With a Knick Knack Paddy Whack Give a dog a bone. This is Dolce’s favorite song!”
After they sang, they presented me with my bone and I went on my merry way! I adore it!
In closing, I would be remiss if I did not stop and say thank you to the cadre of wonderful people I have met in Hartford. Who could have known when I met Stacy at our ATC Darkness To Light facilitator workshop one year ago, that not only would we become fast friends, but that so many wonderful opportunities and other friendships would come my way? It’s been a pleasure and an honor. I hope we have many more opportunities together in the future.
(Bear with me...I have several event photos to share but am having a problem uploading...they are on their way...)